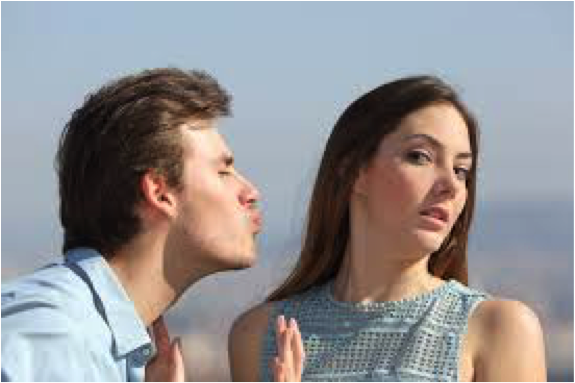 As a therapist I talk to many female clients who want to find a healthy relationship, but are regularly disappointed by men who try to pick them up with all the wrong moves and motives. He usually comes on way too strong, just says what she wants to hear, wants to be physical really early, and seems to enjoy the chase more than getting to know her. This article aims to help men improve their chances of creating a happy and healthy relationship.

How good are you at approaching women? Like it or not, when two people meet, either in person or online, there is an initial period of testing each other for compatibility and to see what you both want, before you both decide to take it further, such as exchanging phone numbers and going on a date.

If you are worried about what is the right way to approach women, then at least you are willing to improve. Women generally don’t like being hassled, so drop the silly one-liners and sexting, they never work. If she doesn’t want to speak with you, please respond maturely. She is allowed to say no to you, just as you are allowed to say no to pickles on your burger.

It’s ok for women to show signs of interest to a man. His response will show her just how mature he is. And just because she shows interest doesn’t mean she wants to have sex with you straight away. Her brain is generally wired differently. It’s also ok to show her you are interested, but just be clear what you are interested in. If you are too focussed on sex, then you are not mature enough yet to find the right person for a relationship, and if she is more mature (very likely) then she will see what you are after from a mile away and politely decline your invitation, because she doesn’t want to be treated like an object. And you are coming across just like the other dozen guys this week that have come onto her.

When you take an interest in someone, remind yourself that you have no idea who she is. And who she is is more important to get to know than what she looks like or if she puts out. If you focus on her looks too much, you will sound like all the other schmucks who have tried to pick her up. My advice is do not use words like ‘hot’ when you first talk to her. It gives the impression that you want her body more than wanting to get to know her. And do not talk about sex too early for the same reasons.

And remember you have no idea what is happening in her life right now. So if you give her your number without talking to her properly, you are really banking on her just wanting sex or being totally swept away by your looks. And that’s usually not enough to get the right person to call you. Don’t come across too interested in picking up, show interest in who she is. Otherwise you come across as over-confident in yourself and/or having only one thing to offer. Most women like guys to make an effort to connect, more than just buying them drinks and saying how great they look.

Lets say she does give you a chance to talk to her. How do you know if she is just being polite or actually taking an interest in you? One easy sign you need to read is whether she is willing to give you any information about herself. If you ask her questions, and she answers, and gradually she starts to become more open with her body language and communication, then you have an opportunity. If you start talking about yourself, but she doesn’t reveal anything about herself, she is either not interested or she is being cautious, and more comfortable finding out about you first – which is smart of her. After all, you could be an axe-murderer, brothel owner, or married with 3 kids, or still living with mum at 45, and you may not be her type, so she needs to find out a little about you. Just don’t talk about you for too long!

If you read her body language accurately it saves you from wasting precious time and money on tracking her down with your one red rose and card with your number on it, if she really isn’t interested. You will know the difference between interest and politeness once your emotional intelligence is high enough. Explain what EI is and how to better it. It will help to invest in improving your social awareness and social skills, and having enough self-awareness to describe your personality, your goals and values, rather than just talk about the material aspects of your life.

If you sense that she is interested, you are allowed to ask her for her number, but she is only likely to give it if you have revealed something about yourself (see above) and you have taken some interest in who she is rather than just focus on what she looks like. If the rapport builds and you are genuinely interested in each other, then you will both want to keep talking and at some point exchange numbers. But if you are struggling to keep the conversation flowing she may not be interested at all.

Could include more on how to talk to her rather than how to know if she is interested.

Here are my top 6 signs that she is not interested;

1.     She looks at her watch and/or phone, trying to work out how to get out of this situation (she wants to be rescued from this awkward situation)

2.     She gets distracted by other people in the room (the grass may be greener elsewhere, or she is looking to be saved)

4.     She doesn’t put much effort into the conversation (rather be somewhere else?)

6.     She starts picking on you jokingly and gives you a fist punch on the shoulder (friend zone!)

If any of these occur, you could simply say you are getting the impression that she is not interested, pause for a second, then if she doesn’t correct you, you wish her a good night and say you will leave her alone. Then leave her alone!

Peter Charleston is a Melbourne Psychologist. For more information about this topic, take a look at Peter’s new book Closer,available now in all retail and online bookstores.

Understand the mistakes that people make about love when dating.

The Eight Most Common Psychological Mistakes of Business Leaders

Some tips for small business leaders and owners

Why Hetero Men need to stop asking their partners for sex

The impacts of asking for sex